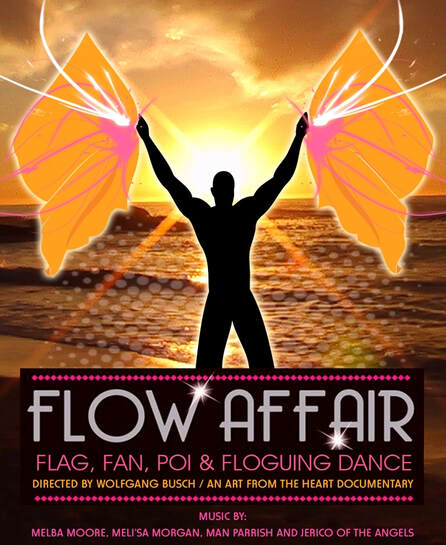 Flow Affair gives you an inside look into the New York City, San Francisco and Chicago
trend setting flag, fan, poi and floguing dance pop culture.
The Flag and Fan Dance is passed on by " The Asking for the Gift."
_Flagging is an extension of a dancing art form, visually conveying the heart and the soul of the music.
It is an in the moment spiritually empowering experience without the edited thought process, and
the performers are local celebrities. The colorful Tie-Dye Flags glow beautifully in black light,
and the glamorously decorated Fans are Mesmerizing Eye Candy for the club goers.

Flagging as we know it today, evolved in the late 1970’s from the West Village Leather Bars to the dance clubs;
12 West & Flamingo and peeked at the Legendary Saint disco during the early 1980’s.
It almost disappeared in the mid 1980’s, because of the AIDS epidemic.

In 2006, director Wolfgang Busch brought together at the "Door" Youth organization in New York City
Luna Khan from the “Harlem House Ball” community; the originators of the dance "Voguing",
you know from Madonna's music video "Vogue", and George Jagatic from the
“Flagging" community, the originators of the "Flagging" dance.
Together they created a new dance called “Floguing", and
we are introducing this new dance in Flow Affair. 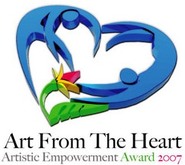 _Art From The Heart is serving the LGBT Community since 1986

YOU can help TOO
please make a donation
Art In Education Programs for the LGBT Artistic Community,
_